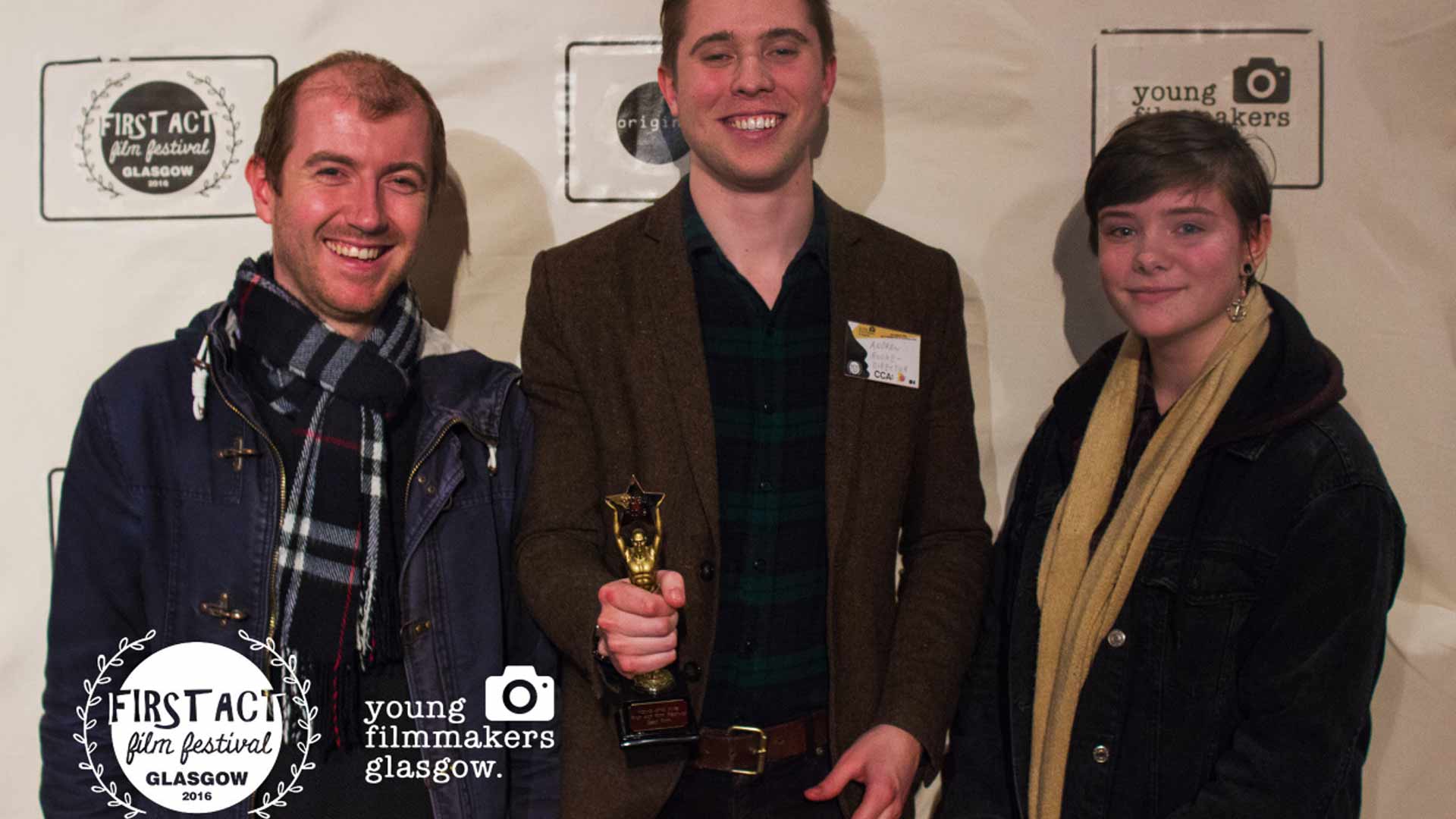 One week ago today, Young Filmmakers Glasgow delivered the opening year of the First Act Film Festival at the CCA Glasgow. We spoke to Andrew Rooke (24), director of Kayla and Kyle, which won Best Film on the night. The award was presented by Mad Max: Fury Road producer, Iain Smith (OBE).

What inspired you to make Kayla and Kyle?

Kayla and Kyle was the result of my brother’s experiences with transitioning from a woman into a man, and the effect it had on both him and my family.

Why do you think it is important that this story in particular is told?

I found that often in films with trans characters, parents and family were demonized as being ignorant, hateful people who treated their trans family members with disgust and rejection. In my own experiences, as well as many of those at the focus group I held for the film’s script, I found that family members were more often confused, afraid, or shocked at a loved one becoming trans. I wanted to make a film that showed both sides of this journey, and that even if being trans was hard for some family members to accept, there was still love to be shared between parents, offspring, and siblings.

Andrew makes a Hitchcockian cameo in 'Kayla and Kyle'

Do you think there has been much progress made on society's view on the LGBTQ+ community?

On the one hand, there is a lot more film and television that features LGBTQ+ characters and content, which is always good for raising a public awareness. However, exposure to this subject matter does not necessarily lead to a deeper understanding, especially among those who are just becoming aware of these issues for the first time. We’ve made progress, but the world is a big place, and we need to keep pushing these themes more and more to have any meaningful impact on our global society. LGBTQ+ characters should be treated as more than just clichés or ticking a box on film, as each person’s experience is subjective.

What films have you previously directed, and how do they compare to Kayla & Kyle?

I have previously directed a variety of short films, including a documentary on city cycling and a comedy about university essay writing. A major step forward in the evolution of my identity as a filmmaker was when I made Devotion during the fourth year of my undergraduate in 2013. The film had a maturity in the way it dealt with love, repression, and moral responsibility, and although I still have a lot to learn as a director, Devotion and Kayla and Kyle have been similar in allowing me to focus on some of the themes that I hold most important in my life.

What does it mean to have Kayla & Kyle's UK premiere at the First Act Film Festival?

Despite screening in festivals around the world, I had not yet had the opportunity to premiere Kayla and Kyle in the UK. Having shot the film in Edinburgh, this seemed a terrible irony. Researching various festivals in Scotland, I decided that the FAFF would be perfect for my film, as it was new, focused, and passionate about delivering its message, values I can easily relate to. Being a young filmmaker trying to make it in the industry can often be daunting, but the First Act Film Festival promised support and enthusiasm for those trying to take their first step into the world of film, and this ended up being more than true when I attended the festival.

What does winning the Best Film award at the First Act Film Festival mean to you?

It is an indescribable honour being selected for this award, especially having screened alongside some immensely talented productions during the festival. Aside from being able to call myself an award winning filmmaker, I hold this award valuable mainly because of the affirmation it gives me in my own abilities. Being a recent graduate can be challenging for a young filmmaker, and I can admit that I’ve had many doubts about my place in this industry since making Kayla and Kyle. Winning Best Film at the First Act Film Festival was a much-needed reminder that I have something to offer this industry, and that the stories I want to tell can be important and relevant to audience members around the world.

What's next for you?

Now that I’ve had my UK premiere, I will be submitting Kayla and Kyle to a few more festivals here before focusing on my next short film, which is in post production at the moment. Short filmmaking isn’t going anywhere in my life. However, I am also currently developing a feature script which takes some of the themes of my previous work and expands on them in new territory. Alongside working on personal projects, I have recently been selected for the Screen NETS Runner placement program, and look forward to working on a variety of film and television sets in the near future. Making films and attending festivals has allowed me to meet some of the most inspiring people in my life, and I hope to continue my journey and growth as a filmmaker into 2016 and beyond.

The First Act Film Festival is over for this year - but next year's will be even bigger and even better, so get your short film ready to submit.